Skip to main content
1.2.0 has been released, check the DOWNLOADS
This is documentation for Apache YuniKorn 0.10.0, which is no longer actively maintained.
For up-to-date documentation, see the latest version (1.1.0).
Version: 0.10.0

A common pattern while processing data is that the application can be divided into multiple stages. Another way to look at this is the fact that processing needs to be kicked off and that the first step is to start a driver or manager for the application. Later stages might depend on the previous stages. When running applications in a size limited environment this could lead to a resource exhaustion when submitting multiple applications at the same time. These first stages might consume all available resources leaving no room for the next stage(s) to start. Often this issue is caused by having a high number of applications start simultaneous and trying to get resources in parallel.

Other batch schedulers like the YARN schedulers use a limit on the number of simultaneous running applications. They use either resource constraints on the driver or management stage or set a hard limit of the number of applications that can run in a queue. The draw back of that solution is that it does not work well in a cluster that can scale up or down automatically in a cloud environment. To work around that percentage based limits could be set on the consumed resources for the driver or management stage. This does not alleviate the fact that driver or management stages can be of any size, large and or small, which complicates the percentage scenario further as it does not give a predictable behaviour.

A different solution would be to assume a specific behaviour of the applications. Using that assumption a limit on the applications could be set based on the state it is in. The spark driver and executor behaviour is the most usual use case. This would provide a way to limit scheduling to existing applications and only drip feed new applications into the list of applications to schedule when there are resources available.

A fallback mechanism has to be built into the algorithm. Not all applications will request more than one allocation. The other case that has to be accounted for could be a misbehaving or a slow application. Having an application stuck in the starting state could cause a scheduler livelock and starvation of other applications.

The other fallback mechanism considered was making the number of allocations for the starting state configurable. This option provided a number of issues which made it difficult to implement. One of the main stumbling blocks is the fact that it requires the application submitter to specify the value. It also does not guarantee that the application will leave the starting state either and does not fix the livelock issue. If an application was submitted with five required allocation but due to issues during the run never asked for more than four then the livelock would still occur.

Setting a default of zero (0) would also not work as it would bypass the starting state. It would make the sorting policy an opt-in instead of an opt-out. Setting a default of one (1) does not give us much enhancement to what we currently propose. It makes the sorting policy an opt-out but does not give the cluster administrator any control over the scheduling behaviour. Weighing those against each other the proposal is to not make this configurable.

Using Spark applications as an example: a new application can only be scheduled if the previous application has at least one (1) executor allocated. 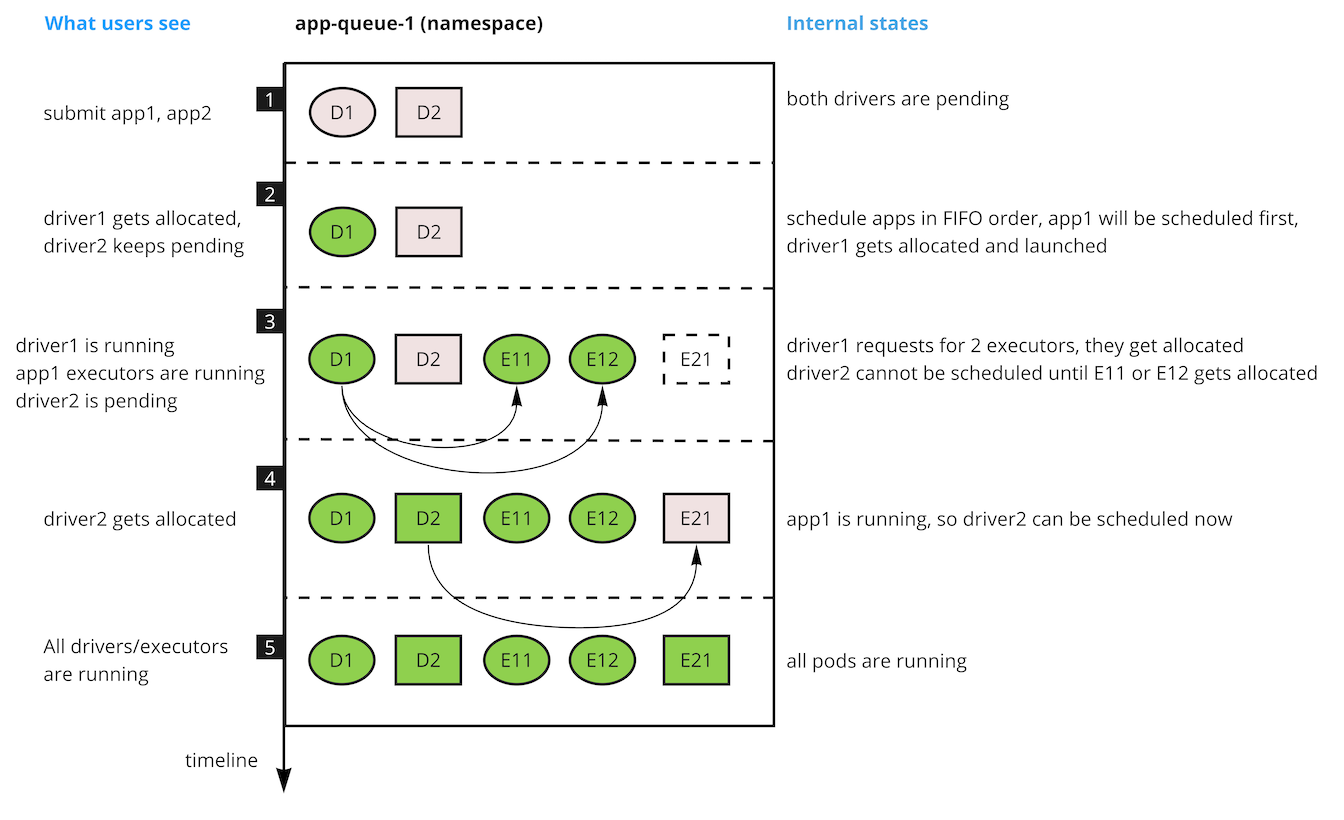 Assume we have the following Spark apps: App1 & App2 as in the diagram above. The applications were submitted in that order: App1 first, then App2. They were both submitted to the same queue.

This process would repeat itself for any new application submitted.